Joan Margot Bevan (née Goddart) was born in July 1916. As a child she went to school in the Brighton area. Her father was a businessman who, when living in Chessington, collected rare animals .This collection was later the basis for Chessington Zoo. Consequently she, her younger sister and brother grew up surrounded by animals. The family also mingled with the circus community and it is not surprising to see clowns featuring in Joan’s later work.

Joan married Edward Bevan (1907–1988), a doctor in Cambridge who, for five months from November 1950, looked after Ludwig Josef Johann Wittgenstein (1889–1951), one of the most influential philosophers of the 20th century, until he died at the Bevan’s home at 76 Storey’s Way, Cambridge.

During the war Joan, her husband and children were evacuated to Shrewsbury. When she came back to Cambridge she started writing stories and plays which unfortunately were not successful. It is only after a friend suggested that she should try painting again that she did. Consequently she attended the Cambridge College of Arts and Technology and was later elected to Cambridge Drawing Society. In 1966 she was made president of the Society 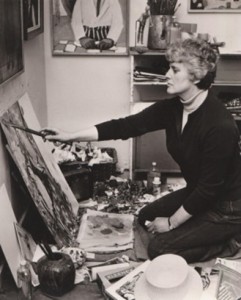 She was an avid sketcher who liked painting on her knees surrounded by oils and brushes (see photo below). The painter Max Beckmann (1884-1950) was her biggest influence. Her paintings included ordinary people, sporting activity, circus scenes and humorous scenes, all painted in oil. Joan Bevan also produced some linocuts of circus scenes, firemen and fire engines. She exhibited in and around Cambridge and at the Fire Engine Tea Rooms in Ely. Many of the Cambridge painters were good friends: Nan Youngman, Pamela Hughes, Pamela Townsend and Tony Day among others. When she died at the age of 92, her great friend Peter Walker, ex-bishop of Ely, gave an address at Great St Mary’s Church.

She was not a relation of Robert Bevan (1865-1925), one of the founders of the Camden Town Group who had very close links with the Minories Art Gallery, although that artist’s influence on Joan Bevan is evident here. They knew each other as part of the Benton End group which included artists such as Cedric Morris. Joan Bevan also knew John Nash whose work forms a large part of the Victor Batte Lay Collection.

I would like to thank Anthony Atkinson (q.v.), President of Colchester Art Society, for making me aware of Joan Bevan, whom he knew well. Thanks also to Anthony Hopkinson, President of Cambridge Drawing Society and Gavin Clark, Cambridge Drawing Society Honorary Secretary, for their help in putting me in contact with Joan Bevan’s children, Anthony Bevan and Liz Morrison. I would especially like to thank the latter for giving me so much interesting information and allowing me to reproduce a rare photo of her mother at work

Support us today. Click here to find out more...